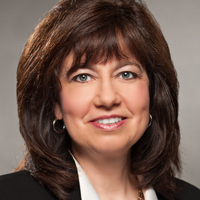 Bonnie Lysyk became the 13th Auditor General of Ontario on September 3, 2013, after having previously served as Provincial Auditor of Saskatchewan, and Deputy Auditor General and Chief Operating Officer of Manitoba.

Lysyk has held senior positions in both the private and public sectors during a 25-year career spent in three provinces. She has extensive audit, finance, risk management and governance experience.

She served as the Deputy Auditor General and Chief Operating Officer for the Office of the Auditor General of Manitoba for nearly seven years and, most recently, as Provincial Auditor of Saskatchewan for over two years. She also held a variety of senior roles at Manitoba Hydro over a 10-year period and served as Chief Audit Executive of the Manitoba Liquor Control Commission.

A native of Winnipeg, Lysyk graduated from the University of Manitoba with a Bachelor of Administrative Studies (Honours) degree and subsequently obtained her designation as a Chartered Accountant while working with Coopers & Lybrand (now PricewaterhouseCoopers). She also has a Masters in Business Administration and is a Certified Internal Auditor.

Lysyk is currently a member of the Canadian Council of Legislative Auditors and sits on the Committee of Professional Conduct of the Canadian Institute of Actuaries and on the Board of the CCAF-FCVI Inc. She has also taught auditing courses in Toronto and overseas.